From Heraldry of the World
Your site history : Kingston (Jamaica)
Jump to navigation Jump to search

Kingston was a separate parish until 1923 when it merged with St. Andrew Parish. Colloquially the name remained Kingston, administratively it is Kingston and St. Andrew Corporation. 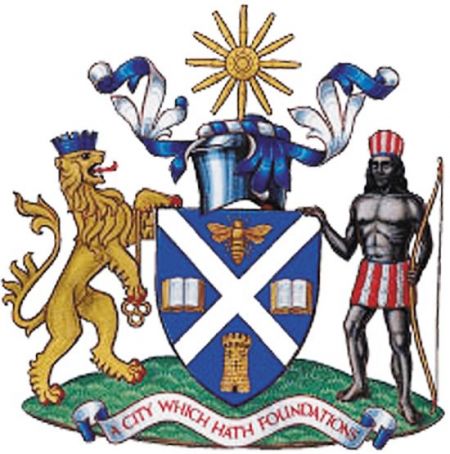 The arms above are for the Corporation granted in 1962.

The cross is the symbol of St. Andrew. The books indicate education and learning as well as the two parishes, The bee recalls Sir William Beeston, governor of Jamaica on whose land the city was established. The tower the fortifications, he historic Port Royal naval fort. The lion and Indian are taken from the previous arms.

The crest of a wheel’s hub with twelve spokes or symbolises the capital as the hub of the parishes. The motto ‘A city which hath foundations’ is from Hebrews 11:10.

The previous arms were granted to Kingston parish/city in 1803: 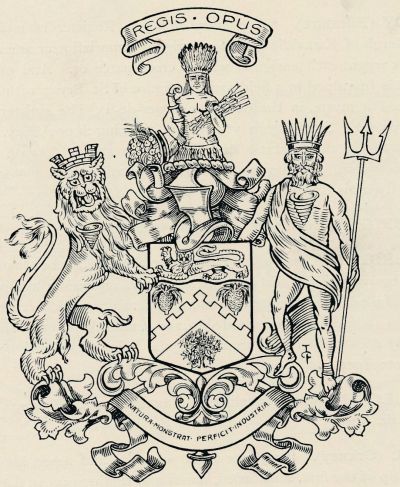 The arms show in chief the English lion, which is also used as one of the supporters. The two pineapples are taken from the arms of Jamaica. The embattled chevron indicates that the city was a fortress. The base shows a coffee tree (actually coffee is a shrub), which, together with the pineapples and the sugar cane stalks and cornucopia in the crest, indicate the agricultural production in the area.

The supporters are the English lion and Neptune as an indication for the importance of the harbour for the city. The crest shows a Native Indian (Taino) with sugar cane and a cornucopia.

The mottoes mean : The King’s work and Nature shows the way, but industry perfects it.

In 1923 Kingston merged with St Andrew parish and a town clerk collaborated with a London printing firm to design new arms. The old arms were squeezed into the first quarter, a cross of St Andrew into the second. A scene of mountains, trees and a river, for the ‘Land of wood and water’, was added below. A Taíno replaced Neptune as the sinister supporter and held a spear rather than a bow. These arms were never granted.