From Heraldry of the World
Your site history : Knottingley
Jump to navigation Jump to search 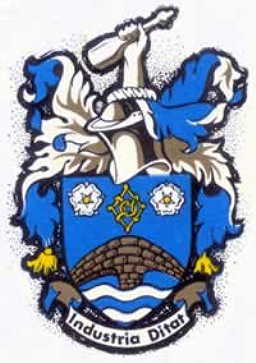 Arms : Azure issuant from Water barry wavy in base a Bridge of two arches proper in chief a Lacy Knot Or between two Roses Argent barbed and seeded also proper.
Crest : On a Wreath Argent and Azure a cubit Arm holding an ancient Glass Bottle proper.
Motto: 'INDUSTRIA DIDAT' - Progress through industry

The arms were officially granted on December 14, 1942.

The water stands for the River Aire and the Knottingley-Goole canal. The bridge represents the Great North road, crossing the river at Ferrybridge. The white roses of Yorkshire represent the history of the town and the golden knot is the emblem of the De Lacy family, who once lived in this area.

The arm held aloft holding a bottle represents the glass industry of Knottingley.