From Heraldry of the World
Your site history : Kuisebmond Secondary School
Jump to navigation Jump to search 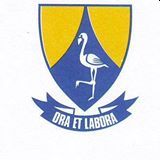 Arms: Per chevron embowed throughout, Or and Azure, in base a flamingo passant Argent.
Motto: ORA ET LABORA

The gold part of the shield represents the Namib desert, while the blue is the vlei (marshland), opening out from the relatively narrow riverbed. The vlei is frequented by flamingos, in this case the lesser flamingo (Phœniconaias minor). These birds vary in colour according to their diet – brine shrimp and blue-green algæ contain a natural pink dye called canthaxanthin that turns their feathers pink, and the more of these creatures they eat, the pinker their feathers are. The Kuiseb River vlei is clearly low in these canthaxanthin-containing creatures, which means that their feathers are white, like the bird in the arms.