From Heraldry of the World
Your site history : Kwantlen Polytechnic University
Jump to navigation Jump to search 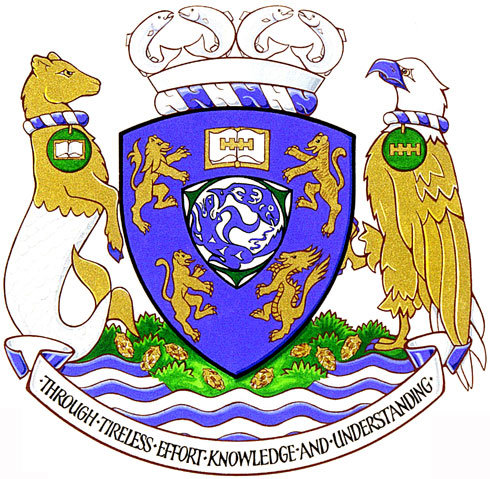 Arms : Azure an escutcheon Argent featuring the spirit of Kwantlen emblem comprising a wolf, a salmon and a river Azure as styled by Brandon Gabriel between in chief dexter a lion sinister a tiger respectant rampant and in base dexter a jaguar sinister a Chinese dragon rampant respectant all Or, in centre chief an open book Argent bound and charged with a billet in fess bretessed Or
Crest : A coronet the upper rim set with four salmon respectant two and two Argent
Supporters : On a grassy mound Vert set with Douglas fir cones Or rising above barry wavy Azure and Argent, dexter a doe Or unguled Azure queued of a fish tail Argent fins Or gorged with a wreath Argent and Azure pendent therefrom a pomeis charged with an open book Argent bound Or, sinister an eagle Or head Argent armed and beaked Azure gorged with a like wreath pendent therefrom a pomeis charged with a billet in fess bretessed Or
Motto: THROUGH TIRELESS EFFORT KNOWLEDGE AND UNDERSTANDING

The central design, originally created by Brandon Gabriel, is the “spirit of Kwantlen”, and honours the Kwantlen First Nation, which gave the university permission to use the name. The river alludes to the meaning of the word Kwantlen, “tireless runner and water”, the wolf is a Kwantlen emblem representing the idea of a teacher and guide, while the salmon refers to new beginnings and new life. These elements are included within the circle of life, which also symbolizes lifelong learning. The four other creatures represent the major cultural groups served by Kwantlen: the lion for Western Europeans, a tiger for South Asians, a Chinese dragon for East Asians, and a jaguar for Central Americans. The book is a symbol for learning, and the rectangle represents a computer chip and new technology.

The salmon coronet links the Kwantlen people with the Fraser River and reinforces the message of new beginnings.

The sea-doe combines the concept of transformation with a local animal representing swiftness and tireless effort. The eagle is a symbol for power, strength of purpose and acuity of sight, and it is the namesake of the Kwantlen sports teams. The book and computer chip, set on jade discs, symbolize learning. The grassy base represents the various campuses of Kwantlen, and the white and blue wavy bars represent the Fraser River, an ancient highway of the Kwantlen people, which flows past all the communities served by the university. The Douglas fir cones make a connection with the tree of knowledge and the tree of life, as well as to the origins of the university in Douglas College.