From Heraldry of the World
Your site history : La Trobe University
Jump to navigation Jump to search 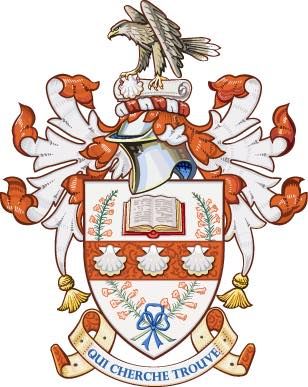 Arms : Argent, a chaplet of common Heath proper, tied Azure, and circling in chief a Book expanded also proper leathered Gules, over all on a Fess of the last three Escallops Silver.
Crest : On a Wreath Argent and Gules a Parch­ment Scroll, perched thereon an Australian Wedge-Tailed Eagle, wings addorsed and inverted proper, the dexter claw supporting an Escallop of the Arms.
Motto: 'Qui Cherche Trouve'.

The arms were granted in November 1966.

The three escallops are from the arms of the La Trobe family, and the common heath is the floral emblem of Victoria. The Provencal form of the Motto, which may be the original one, renders 'trouve' as 'trobe'.