From Heraldry of the World
Your site history : Lady Eaton College
Jump to navigation Jump to search 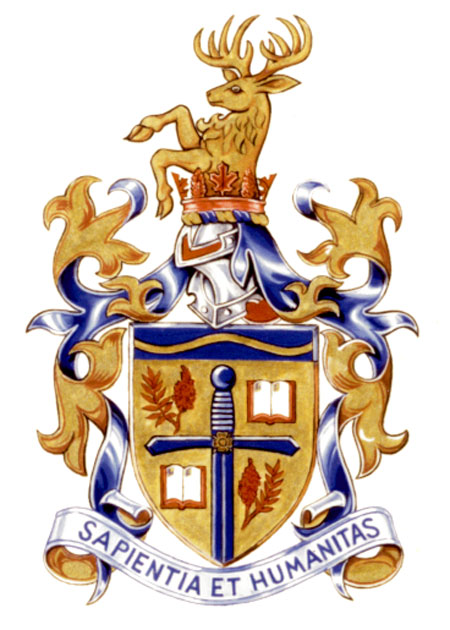 Arms : Or a demi broad sword in pale Azure issuant from the base and charged at the crossing with a rose Or in dexter chief and sinister base a sprig of sumac leaved and fructed Gules and in sinister chief and dexter base an open book Argent bound and edged Gules on a chief Azure a barrulet undy Or
Crest : Rising out of a coronet of maple leaves and clusters of sumac berries Gules a demi stag rampant Or
Motto: SAPIENTIA ET HUMANITAS

The arms were officially granted on November 29, 1989.

The sword is found in the emblem of Trent University. The rose at its centre is taken from the bookplate of Lady Eaton. The sumac represents the flora found on the drumlin, a major land formation located behind the college. The open book represents education. The wavy line in the chief represents the drumlin. The blue is the main colour of the coat of arms of the McCrea family, Lady Eaton’s birth surname, and the gold is that of the arms of Sir John Eaton, Lady Eaton’s husband.

The stag represents the natural heritage of the region, and the sumac repeats the symbolism of the arms. The maple leaves, from Lady Eaton’s personal arms, are symbolic of the national scope of the college.

The motto means "Wisdom and humanity"