From Heraldry of the World
Your site history : Laird Sky
Jump to navigation Jump to search 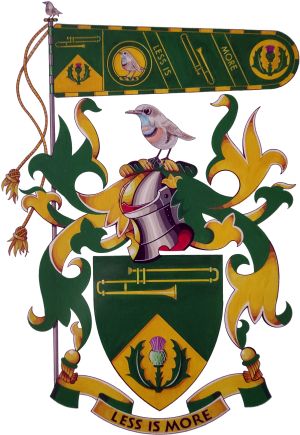 Arms: Per chevron Vert and Or, in chief a sackbut placed fesswise of the last and in base a thistle slipped and leaved Proper. Crest: A bluethroat (Luscinia svecica) Proper, perched upon a wreath of Or and Vert. Motto: Less is More

The armiger lives in North Yorkshire and is a Licentiate of London College of Music. The sackbut reflects his principal instrument, the tenor trombone. The thistle shows his Gaelic origins. The motto, his interest in minimalism. The Crest, the male Bluethroat has a varied and very imitative song, a pun on the armigers profession.

South African Bureau of Heraldry on 5th May 2015. Certificate number 3850 These arms have been registered as a Trade Mark (Class 41: Education services relating to music) with the UK Gov Intellectual Property Office under no.UK00003103525.