From Heraldry of the World
Your site history : Lakefield College School
Jump to navigation Jump to search 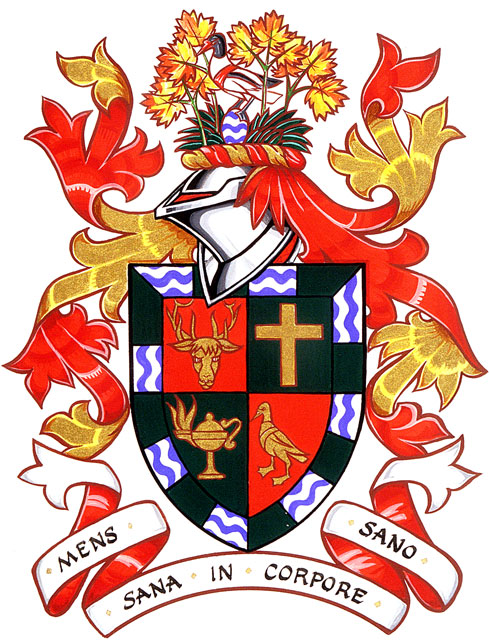 Arms : Quarterly Gules and Vert in the first quarter a stag's head caboshed in the second a Latin cross in the third a lamp enflamed and in the fourth a sheldrake all Or a bordure compony barry wavy Argent and Azure and Vert
Crest : Between two grassy mounts on each two sprays of the maple tree leaved in the fall tints proper a fountain statant thereon amid the trees a sheldrake also proper
Motto: MENS SANA IN CORPORE SANO

The colours red and green were introduced as the school colours by Mrs. Mackenzie, the headmaster’s wife, circa 1895 with the use of red and green ribbons to be worn by school supporters at games. The stag’s head is taken from the arms of the Chief of the Clan Mackenzie and thus honours Lakefield’s second headmaster, the Reverend Dr. A.W. Mackenzie. The cross symbolizes the Christian faith, a central component of Lakefield’s original first headmasters, Mr. Sparham Sheldrake and Dr. Mackenzie. The lamp of knowledge represents the process of learning and is traditionally associated with academic institutions. The sheldrake celebrates the memory of Mr. Sheldrake, who founded Lakefield in 1879. The border of green fields and wavy bars symbolizing water depicts the word Lakefield in visual terms.

The disc of wavy bars between two grassy mounds refers to the name Lakefield. The sheldrake refers to Sparham Sheldrake, and the four maple sprays honour Lakefield’s original name, The Grove-Preparatory School for Boys.

The motto means “A sound mind in a sound body”, and was chosen by Dr. A.W. Mackenzie and his father, Archdeacon Mackenzie.