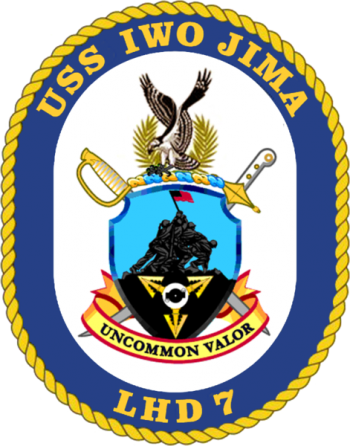 Shield: Celeste on a mount Sable issuing from base the United States Marine Corps War Memorial Proper, in base three pheons radiating Or one to base superimposed by a plate bearing a Hero’s boiler Sable.
Crest: From a wreath Or and Celeste a wreath of palm Vert superimposed by an osprey stooping Proper.
Motto: A scroll Or fimbriated Gules inscribed “UNCOMMON VALOR” Azure.
Supporters: A United States Navy and Marine Officer’s sword saltirewise points down Proper.
Seal: The coat of arms emblazoned upon a white oval enclosed by a blue collar edged on the outside with gold rope and inscribed “USS IWO JIMA” above and “LHD 7” below in gold.

Iwo Jima was the site of one of the most important and most bitterly fought amphibious operations of World War II in the Pacific theater. The United States Marine Corps War Memorial is based on the famous photograph of the flag raising on Mount Suribachi on Iwo Jima and has become a symbol of valor and strength. The three pheons represent the amphibious triad: The Landing Craft Air Cushion, The Advanced Amphibious Assault Vehicle and the Osprey Tilt rotor aircraft. The light blue reflects the seas of the world. The USS IWO JIMA, one of the last ships propelled by steam boilers, is reflected by the white disc with the Hero’s boiler. USS Iwo Jima will be among the first LHDs to deploy with the Osprey MV-22 tilt rotor aircraft. This is symbolized by the attacking Osprey. The previous USS Iwo Jima (LPH-2) was a helo-carrier during the Vietnam Era. The palm fronds commemorate the previous ship named Iwo Jima and its service in Vietnam. The motto is based on Fleet Admiral Chester W. Nimitz’s words when he spoke eloquently of the sailors and marines who fought at Iwo Jima: “Among the Americans who served on Iwo Island uncommon valor was a common virtue.” The red is emblematic of valor and sacrifice. The crossed swords highlight cooperation and represent the Navy-Marine Corps Team.