From Heraldry of the World
Your site history : Landschaftsverband Rheinland
Jump to navigation Jump to search 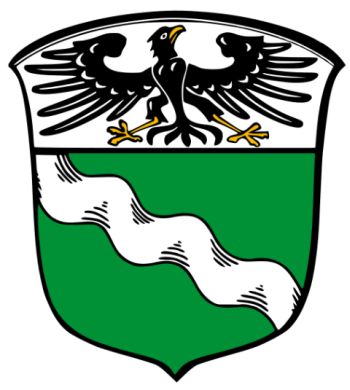 The arms were officiially granted in ?.

The arms show the river Rhine in a green field, symbolising the rich agricultural region and in the chief the Prussian eagle.

The arms are identical to on the historical arms of the Prussian Grand Duchy of the Niederrhein, founded in 1817. The design later became the arms of the province of Rheinland, which showed the silver river on an escutcheon on the Prussian eagle.

After 1945 the historical arms were restored.

The Landschaftsverband is an association of districts and municipalities in the Rheinland region (more or less the area between the Rhine and France, Luxembourg, Belgium and the Netherlands).