From Heraldry of the World
Your site history : Langara College
Jump to navigation Jump to search 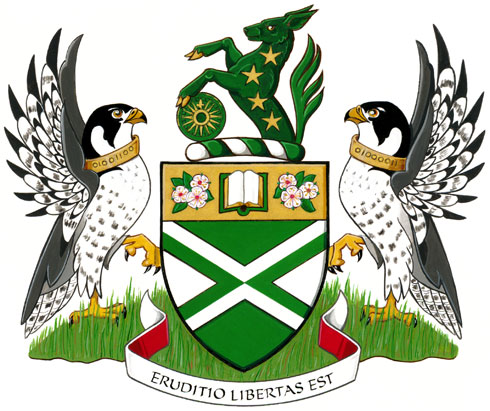 Arms: Per saltire Vert and Argent a saltire counterchanged, on a chief Or an open book proper bound Vert between two blooms of cherry blossoms leaved proper.
Crest: A demi-pantheon Vert semé of mullets Or its sinister leg resting on a mariner’s compass Vert embellished Or.
Supporters: Two peregrine falcons proper each gorged with a collar Or inscribed with zeros and ones Sable and standing on a base of river grass Vert.
Motto: ERUDITIO LIBERTAS EST

The X shape symbolizes the college as a crossroads where students from varied backgrounds meet and then follow various life paths. It also alludes to the Langara campus, which features angular buildings surrounded by green space. The book indicates that Langara is an educational body, and the cherry blossoms are a feature of Vancouver in the spring.

The pantheon represents imagination, achievement and the natural world. The use of gold stars on green refers to the arms of the Spanish admiral Juan de Langara y Huarte, for whom the College was named. The mariner’s compass also alludes to the early Spanish explorers, as well as the college’s role in guiding its students.

The falcon is the mascot of the college’s intercollegiate sports teams. The binary code on their collars (meaning “L” and “C” for Langara College) honours the college’s commitment to innovation in instructional information technology. The base of river grass represents the location of the college’s campus in the traditional territory of the Musqueam Nation, “Musqueam” meaning “where the The motto means “Knowledge is freedom”.