From Heraldry of the World
Your site history : Langford
Jump to navigation Jump to search 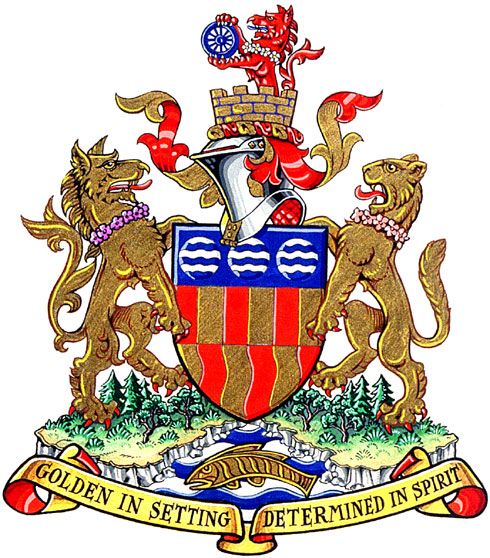 Arms : Paly of six Gules and Or per fess paly wavy counterchanged on a chief Azure three fountains.
Crest: Issuant from a mural crown Or masoned Azure a demi heraldic tyger Gules gorged with a wreath of dogwood flowers Argent holding between its forepaws a steam locomotive wheel Azure.
Supporters: On a grassy mound Vert set with arbutus trees and pine trees proper rising above barry wavy Argent and Azure charged with a Salish salmon Or dexter a heraldic tyger Or gorged with a collar of lavender flowers Purpure sinister a female cougar Or gorged with a collar of Cheals weeping crabapple flowers Rose.
Motto: GOLDEN IN SETTING DETERMINED IN SPIRIT

The red and gold bars are based on the arms of Captain Edward E. Langford (1809-1895), the district's namesake, who arrived in the region in 1851. The vertical wavy lines symbolize a waterfall, a particularly important natural setting in the municipal area. The three fountains symbolize the lakes of the District of Langford: Langford Lake, Glen Lake and Florence Lake.

The mural coronet denotes that these are the arms of a municipality. Springing forth from the coronet is a heraldic “tyger” based on Captain Langford's crest. It wears a collar of white dogwood flowers, British Columbia's official flower. The tyger holds a steam locomotive wheel in its forepaws alluding to the historic Esquimalt and Nanaimo Railway and the ongoing importance of the transport industry in the community.

The tyger reinforces the reference to Captain Langford and its collar of purple lavender alludes to its abundant presence in the Happy Valley area of Langford. The cougar supporter symbolizes the local natural heritage and her collar of pink Cheal's Weeping Crabapple flowers represents the official tree of Langford. The lush vegetation, parkland, rocky outcrops and forests are honoured by the base upon which the supporters stand. The blue and white represent the streams and waterways used by the Chum salmon during their mating season. The salmon rendered in Salish style pays homage to the salmon run and the First Peoples of the region.

The motto lends a reference to the beauty of Langford, including a specific reference to Goldstream Park. It also suggests this community's drive to enhance Langford's unique character and surroundings.