From Heraldry of the World
Your site history : Langley Park School for Boys
Jump to navigation Jump to search 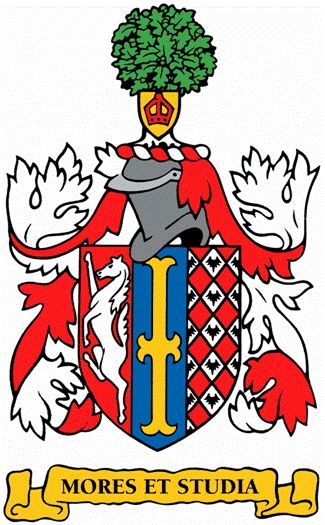 Arms: Tierced in pale Gules - Azure and lozengy Gules and Ermine the first charged with a Horse forcene Argent the second with a Cross Moline Or.
Crest: upon a Wreath Argent and Gules An Oak tree fructed proper an escutcheon Or charged with a Mitre Gules, mantled Gules doubled Argent.
Motto: 'Mores et Studia'

The arms were officially granted on August 4, 1926.

The shield depicts the 'white horse of Kent' and the two families taking control of the Manor of Beckenham: Bruyns (1300-1465), and de la Rokele (1240-1300). An allusion to a neighbouring woodland owned by Westminster Abbey is made in the crest of an oak tree and a mitre.

The motto was suggested by a master.