From Heraldry of the World
Your site history : Lauder
Jump to navigation Jump to search 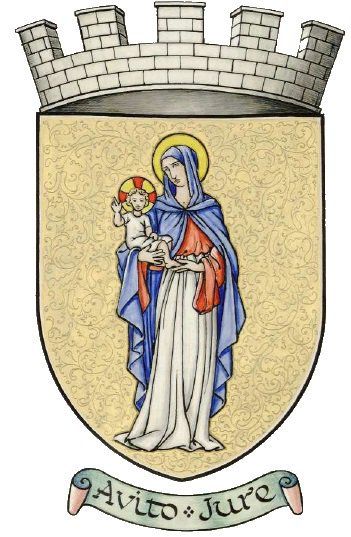 Or, the Blessed Virgin standing and holding the Holy Child all Proper.

Lauder is an ancient Burgh which may have been a Royal Burgh in the reign of King Robert I (1306-1329) or else a Burgh of Barony granted by the same King to his famous commander, Sir James Douglas.

The arms are based on the Burgh seal, which bore a representation of the Virgin and Child; there is a 1725 impression on record but the seal is obviously much older.

The gold field is the obvious choice if the Virgin and Child are to have their proper colours. The connection of the Virgin Mary with Lauder is not clear, as she does not seem to have been the patron saint of the town. It may, however, come from Dryburgh Abbey whose monks had the advowson of Lauder parish church until the Reformation and the Virgin and Child appear on several Abbey seals.
Alternatively, the connection may have something to do with the Hospital of Lauder (founded c. 1170), which appears to have been dedicated to the Virgin and to St. Leonard.

The Latin motto - "By ancestral right" - was adopted in 1938 and denotes that the arms have been used by Lauder for many centuries.

The arms are now used by the Lauderdale Community Council.