From Heraldry of the World
Your site history : Laurentian University of Sudbury
Jump to navigation Jump to search 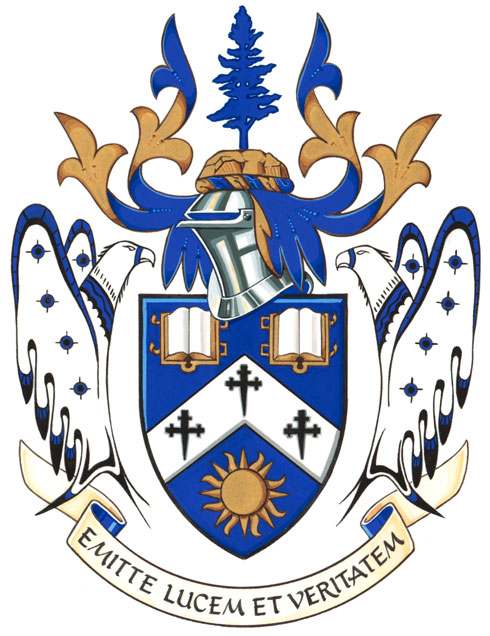 Arms : Azure on a chevron Argent between in chief two open books proper edged bound and clasped Or and in base a sun in splendour Or, three cross-crosslets fitchy Sable
Crest : A white pine tree Azure set on a rocky mount Or
Supporters : Two eagles in Anishinaabe style Argent embellished Azure and Sable
Motto: EMITTE LUCEM ET VERITATEM

The shield, crest and motto were originally devised in 1960 by faculty member Terence Gaffney. The chevron resembles a roof-top and refers to the university as a house of learning. The open books are a symbol of education and represent the two languages of instruction at Laurentian, one of the few bilingual universities in Canada. The sun alludes to the idea of illumination. The three crosses recall the three church-affiliated colleges (the University of Sudbury, Thorneloe University, and Huntington University) that federated to create the new non-denominational university in 1960.

The pine tree is a reference to the region. The yellow base is taken from a more recent emblem used by the university. The blue and yellow colours are those of the university.

The eagles, using a design by the Anishinaabe artist and Laurentian University alumnus Leland Bell, are a sacred creature for the First Nations and thus refer to the university’s important relationship with the Native community.

The motto means “Send out light and truth”, and refers to the task of the university and to the symbolism of the sun in the arms. It is based on Psalm 43:3.