Law Society of England and Wales

From Heraldry of the World
Your site history : Law Society of England and Wales
Jump to navigation Jump to search

LAW SOCIETY OF ENGLAND AND WALES 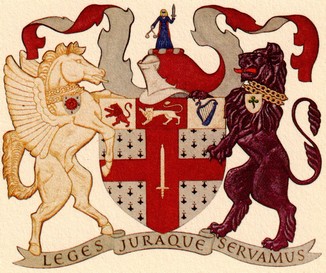 Arms : Ermine, on a cross gules a sword sheathed in pale, point upwards, Or; a chief of the last, thereon a pale of the second charged with a lion passant guardant of the third, between a lion rampant also of the second upon the dexter side and upon the sinister a harp azure.
Crest: On a wreath of the colours, The figure of Justice represented by a female figure blindfolded, habited azure, mantled gules, in the right hand a balance suspended Or, and in the left a sword erect proper.
Supporters: On the dexter side a pegasus Or, around the neck a double chain gold and pendant therefrom an escocheon ermine charged with a rose gules; and on the sinister side a lion purpure, around the neck a double chain and pendent therefrom an escocheon Or charged with a trefoil slipped vert.
Motto: Leges juraque servamus.

The arms were officially granted on June 4, 1845, the supporters were granted one day later.

If you have any information on these arms Society of England and Wales mail us !