From Heraldry of the World
Your site history : Lawrence Patrick Henry
Jump to navigation Jump to search 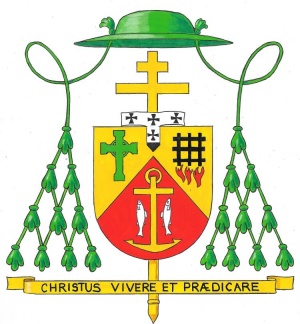 The anchor refers to the work of evangelisation by the Apostles preaching the Cross of Jesus Christ the means of our salvation from sin and death. The Fathers of the Church often described this preaching as a "hook by which people drowning in sin could be fished out and saved". The anchor represents that hook. An anchor is also part of the arms of the city of Cape Town.

The two fish, a messianic symbol of s alvation, represent the people who are saved through the cross.

The grill consumed by flames in the bottom left part refers to the Martyrdom of St Lawrence (the patron saint of the bishop), the deacon who was roasted alive under the persecution of Valerian; it thus expresses the Christian's witness in living and preaching Christ, even in the face of death.

The Celtic cross recalls that Archbishop Henry first received the Christian faith and education through Irish Capuchin priests and Irish Christian Brothers. It also associates his second name, Patrick with Ireland's patron, St Patrick. The double beam on the cross, the palium and the ten tassels on either side of the shield indicate that he is a metropolitan archbishop.