From Heraldry of the World
Your site history : Leduc
Jump to navigation Jump to search 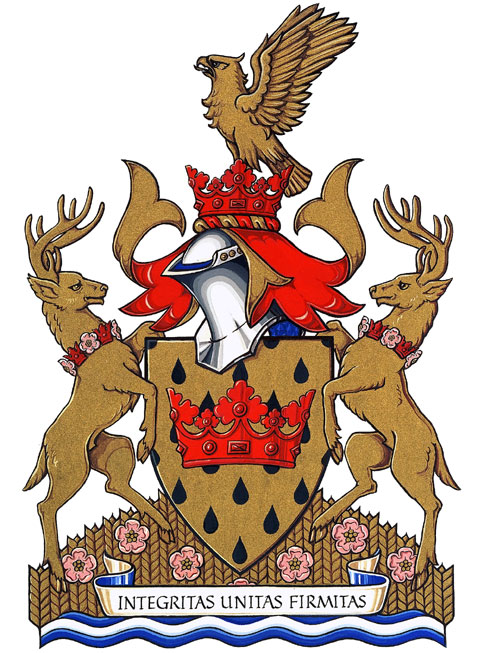 The gold and red link the arms to the colours used by the City in its current wordmark. The gold symbolizes the wealth from grain and, from the oil that for more than 50 years has been a pillar of the local, provincial and national economy. The black drops are a traditional heraldic method of representing oil, and here they represent the first wells that were tapped, the huge Leduc oil field beginning in 1947. The ducal coronet is a pun on the name of the City and honours its namesake, Père Leduc.

The coronet links the crest with the shield. The hawk was one of several creatures chosen by Council’s Advisory Committee to represent the natural heritage of the area. It also symbolizes acuity of sight as Council and citizens look forward to the future.

The deer have also been chosen to represent the City’s natural heritage. Their collars repeat one of the central symbols of the shield and refer to the City’s name. The compartment refers to the grainfields surrounding the City which remain an important component of its economy. The water represents Telford Lake, a centrepiece for Leduc’s recreational activities. The wild rose emphasizes Leduc’s status as an Albertan community.

The motto means “Integrity, unity, strength”, and was chosen by the Committee to represent Leduc’s character and aspirations.