From Heraldry of the World
Your site history : Leeds
Jump to navigation Jump to search 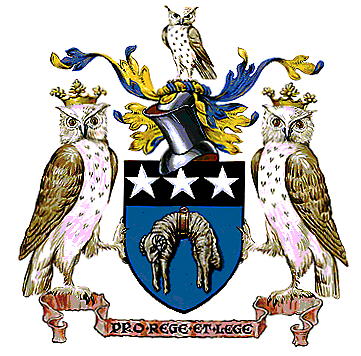 Arms : Azure a Fleece Or on a Chief Sable three Mullets Argent.
Crest : On a Wreath of the Colours an Owl proper.
Supporters : On either side an Owl proper ducally crowned Or.
Motto: 'PRO REGE ET LEGE' - For king and law

Recorded at the Visitaion of 1666. Crest and supporters granted on November 7, 1921, but used before.

When the Royal Charter was granted to the town in 1626 the new Corporation adopted an achievement of arms:- Azure, a fleece or, on a shield supported by two owls argent ducally crowned, and the first seal was engraved accordingly. The fleece was symbolic of the town's staple trade and the supporters were a compliment to the first Alderman, Sir John Savile, whose arms contained three owls argent.

A new Corporate seal was struck in 1662 after the granting of the second Charter, which gave Leeds its first Mayor. The first holder of the office was Thomas Danby, and in his honour a chief sable bearing three mullets argent (part of the Danby arms) was incorporated in the arms on the new seal.

The arms continued to be used in that form, sometimes without supporters, until 1836 when, after the reconstitution of the Corporation under the Municipal Corporations Act of 1835, the full insignia of shield, crest, supporters and motto came into regular use.

In 1921 the College of Arms, on the representations of the Corporation, confirmed and assigned the Crest and Supporters but changed them from owls argent to owls proper.

The motto "pro rege et lege" translates into English as "for king and law".