From Heraldry of the World
Your site history : Leeds and Holbeck Building Society
Jump to navigation Jump to search 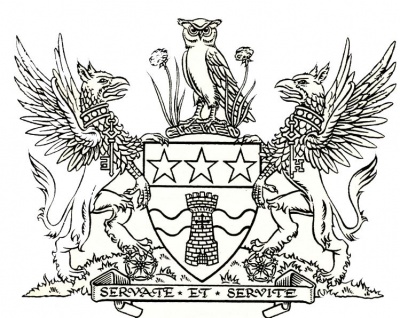 Arms: Azure, a fesse wavy argent surmounted of a tower Or; on a chief sable three mullets also argent.
Crest: On a wreath of the colours, An owl between two sprigs of thrift flowered and leaved proper.
Supporters: On either side a griffin argent gorged with a collar gules charged with three bezants, pendent from the collar a key also gules, and resting the interior hind paw on a rose also argent barbed and seeded proper.
Motto: Servate et servite.

If you have any information on these arms and Holbeck Building Society mail us !