From Heraldry of the World
Your site history : Leys School
Jump to navigation Jump to search 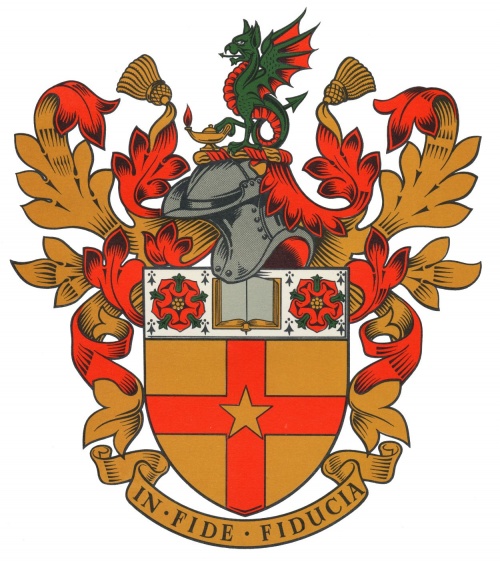 Arms : Or a cross gules charged,in the centre with a mullet of the field, on a chief ermine an open book argent embellished of the first between two roses of the second, barbed and seeded Proper.
Crest : On a wreath of the colours a wyvern proper resting the dexter claw on an antique lamp or flaming gules.
Motto: IN FIDE FIDUCIA ( ("ln faith is our trust").

The red cross signifies the Christian foundation of the School, the open book and the lighted lamp are symbols of learning, and the spur-rowel probably denotes stimulus.

The signifrcance of the red rose is obscure: three such roses appear in the arms of the largest Cambridge college, Trinity, and Cambridge Town bears two silver roses in its arms. The most likely explanation, however, of the red roses is that several of the School's founders were from Lancashire.

The stars of the original design may have symbolised aspiration or faith and hope in higher things. The wyvern, the crest used by the Wesley family, was presumably added to signify the association of The Leys School with the Wesleyan Methodist Church.