From Heraldry of the World
Your site history : Lincoln College (Oxford University)
Jump to navigation Jump to search 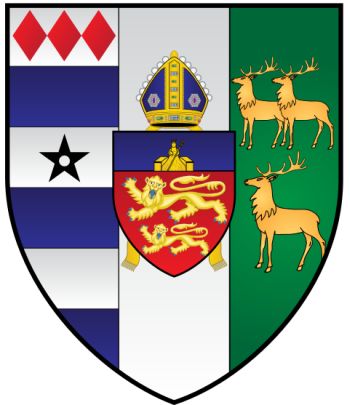 Tierced in pale, the centre argent thereon an escutcheon of the Arms of the See of Lincoln ensigned with a mitre all proper, the dexter side barry of six argent and azure in chief three lozenges gules, the sinister side vert three stags trip­ pant two and one argent attired Or.

Richard Fleming, Bishop of Lincoln was responsible for founding this college in 1427. The arms show the arms of the See of Lincoln on an argent field in the centre compartment (as in the arms of Brasenose and Corpus Christi) whilst the arms of the founder, barry of six argent and azure, in chief three lozenges gules, the third bar charged with a mullet pierced sable, are shown in the dexter compartment. The arms on the sinister side, vert three stags statant or, are those of Thomas Rotherham or Scott of Rotherham who re-endowed the College in 1478. Rotherham was also Bishop of Lincoln.