From Heraldry of the World
Your site history : Lloyd's Register of Shipping
Jump to navigation Jump to search 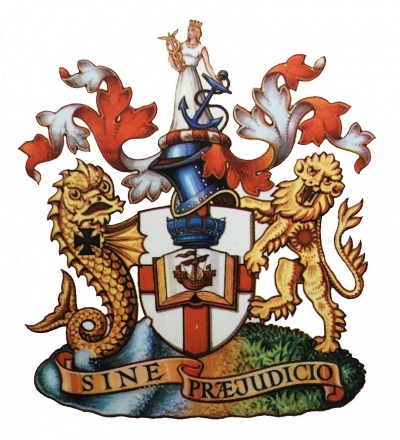 Arms: Argent, a cross gules surmounted of an open book proper, edged Or bound also gules, thereon a lymphad, sail set, pennon and flags flying, of the last, the book ensigned with a mercantile crown azure.
Crest: On a wreath of the colours, A woman proper, habited argent, crined and murally crowned Or, the dexter arm supporting a caduceus gold, the sinister hand resting on an anchor azure cabled sable.
Supporters: On the dexter side a dolphin guardant Or charged with a cross paty sable, and on the sinister side a lion guardant gold charged with a sun in splendour gules.
Motto: Sine praejudicio.

The arms were officially granted on December 10, 1957.

The red cross is taken from the arms of the city of London, where the company originates. The book and the ship are obvious for the famous Lloyds Ship Registry. The crown is a mercantile crown, indicating the importance of commercial shipping.

The crest shows a female figure, used by Lloyd's for nearly 200 years as a logo, known as the Ladybadge. The caduceus and anchor are symbols for trade and shipping respectively. She wears a mural crown, again a symbol for the city of London.

The golden dolphin supporter is again a marine symbol, and bears a Maltese Cross, another historical symbol for the company. The lion symbolises land and industrial connections and bears a sun, symbol of power.

The motto means Without prejudice.

Literature : Information from leaflet from the company and Dennis Colverson.