From Heraldry of the World
Your site history : Lloyd's of London
Jump to navigation Jump to search 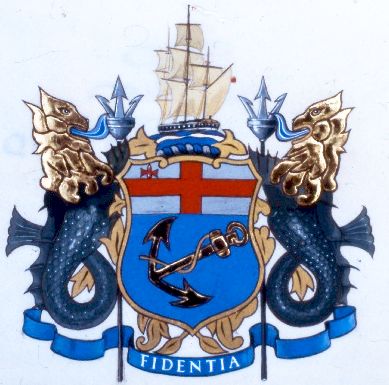 Arms: Per fesse argentand azure, in chief a cross with in the dexter canton a sword erect gules, and in base a fouled anchor in bend sinister Or.
Crest: On a wreath of the colours, Upon waves of the sea a representation of H.M.S. La Lutine thirty-two gun frigate in full sail, all proper.
Supporters: On either side a sea lion proper, the head and mane Or, support­ing a trident erect also proper.
Motto: Fidentia

The arms were officially granted on December 10, 1926.

The golden fouled anchor associates with the sea, but it also serves as a visual reminder of security, safety, good faith, and the all embracing protection against the ills that beset us — a sheet-anchor of trade and commerce offered by the bearers.

The chief shows the arms of London.

The crest is a representation of H.M.S. La Lutine a 32 gun-frigate in full sail all proper. La Lutine was a French vessel launched for the French Navy in 1785. It was later captured by the British, re-equipped as a thirty-two gun-frigate and commissioned in the British Fleet. In October 1799 merchants applied to the Admiral Commanding the North Sea for a King's ship to carry money and bullion to Hamburg, to the amount variously estimated from £140,000 to £1,400,000 and La Lutine was chosen. She sailed on 9th October 1799 from Yarmouth Roads for Hamburg and was wrecked off the north coast of Holland with the loss of all on board.
Efforts from time to time have been made to recover the treasure without much success. The vessel's rudder was recovered and has been made into a table and chair now in the library at Lloyds. The ship's bell was salved in 1859. It hangs in the Rostrum in the Underwriting Room and is rung to call members attention when an important announcement is to be made. In the old days this was normally news of overdue vessels when one stroke signified bad news and two strokes good news.

The heraldic Sea Lions holding tridents still further stress the watchfulness of the company in all matters relating to the sea and its hazards.

The motto "Fidentia" is taken from Cicero's " Tusculunae Disputationes " which reads " That by which in great and honourable undertakings our minds lay up in themselves confidence and assured hope," suggesting boldness in enterprise, self-confidence in results.

Literature : info send to me by M. Walker