From Heraldry of the World
Your site history : Lloyds Bank
Jump to navigation Jump to search 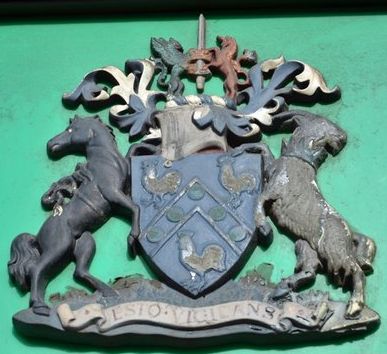 Arms: ·Azure, five bents in chevron between two chevronels and three cocks argent, wattled, crested and armed Or.
Crest: On a wreath of the colours, A griffin Or and a unicorn gules, armed unguled, crined and tufted argent, respectant and supporting between them a sword erect also gules, the blade en: filed by a mural crown gold.
Supporters: On the dexter side a horse reguardant sable, knotted above the girths with a riband, the end flowing to the dexter argent; and on the sinister a goat reguardant argent, armed, unguled and gorged with an Eastern crown Or.
Motto: Esto vigilans.

The arms were officially granted on February 17, 1956.