From Heraldry of the World
Your site history : London Assurance Company Limited
Jump to navigation Jump to search 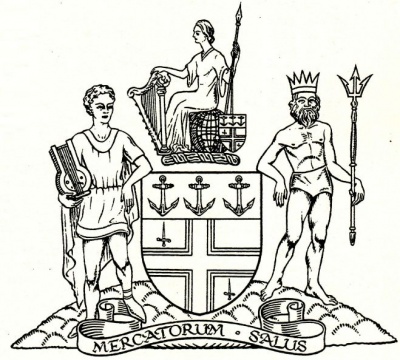 Arms: Argent, a cross cotised, in the first and fourth quarters a dagger erect gules; on a chief azure three anchors of the field.
Crest: On a wreath of the colours, A female figure habited argent seated upon a terrestrial globe proper, resting the dexter hand upon a harp Or and supporting with the sinister hand a spear, point upwards, also proper, pendent therefrom by a riband gules an escutcheon of the Arms.
Supporters: On the dexter side a figure representing Apollo and on the sinister side a figure representing Neptune, both proper.
Motto: Mercatorum salus.

The arms were officially granted on September 30, 1937.

If you have any information on these arms Assurance Company Limited mail us !