From Heraldry of the World
Your site history : London College of Accountancy Business School
Jump to navigation Jump to search 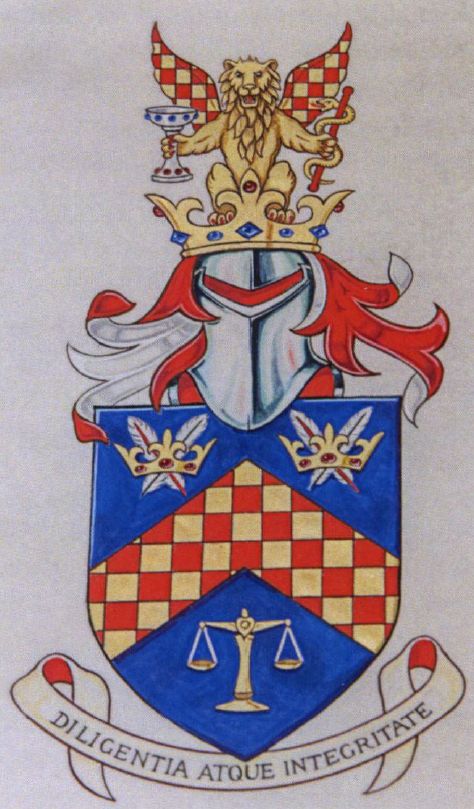 Arms: Azure a Chevron cheeky Or and Gules between in chief two Ancient Crowns or jewelled Gules each enfiled by two Quills in saltire Argent the spines respectively Gules and Sable in base a Balance Or.
Crest: Issuing from an Ancient Crown Or jewelled proper a Lion sejant erect affronty sans queue Or winged checky Gules and Or holding in the dexter forepaw a Goblet Argent jewelled proper and in the sinister forepaw a Rod of Aesculapius Gules the Serpent Or mantled Gules doubled Argent.

The checky chevron symbolises finance (hence Exchequer) and the two Ancient Crowns the fact that the College has twice received The Queen's Award for Enterprise.
The Quills have their spines Gules and Sable, for being 'in the black' and 'in the red', positive and negative outcomes of commercial life.

The College teaches law (hence the Balance), hospitality studies (represented by the Goblet) and health studies (the Rod of Aesculapius). The winged Lion carries the British values of diligence and integrity (the motto is Diligentia atque Integritate) across the world, as the College operates overseas with great success.