From Heraldry of the World
Your site history : London College of Music
Jump to navigation Jump to search 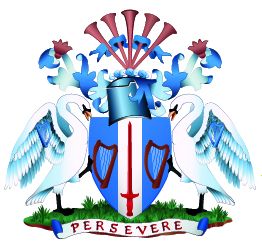 Arms : Azure, on a pale argent between two harps Or, stringed of the second, a sword gules.
Crest: On a wreath of the colours, Five trumpets in pile Or enfiled with a riband azure.
Supporters: On either side a swan rousant proper charged on the wing with a harp azure.
Motto: Persevere.

The arms were officially granted on December 23, 1944.

If you have any information on these arms College of Music mail us !