From Heraldry of the World
Your site history : London Oratory School
Jump to navigation Jump to search 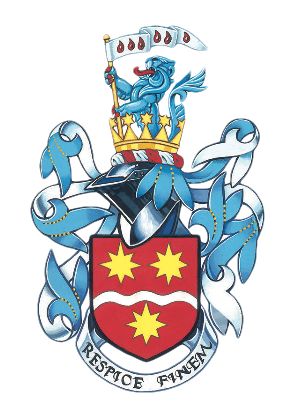 Arms: Gules a bar wavy Argent between three Mullets of eight points Or.
Crest: Upon a Wreath Argent and Gules Issuant from a Celestial Crown Or a demi-Lion Bleu Celeste grasping a Staff Or flying therefrom to the sinister a Pennant Argent charged with six Gouttes in fess Gules
Motto: "Respice Finem"

The arms were officially granted in 1995.

If you have any information on these arms Oratory School mail us !