From Heraldry of the World
Your site history : London and Lancashire Insurance Company Limited
Jump to navigation Jump to search 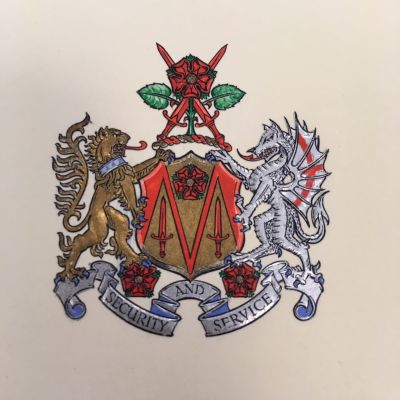 Arms: Gules, a pile between two piles reversed Or, the one in chief charged with a rose of the field barbed and seeded proper and the two in base with a sword erect also of the field.
Crest: On a wreath of the colours, In front of and entwined with two swords in saltire a rose gules, barbed, seeded, stalked and leaved, proper.
Supporters: On the dexter side a lion Or collared vair and on the sinister side a dragon argent charged on the wings with a cross gules; both langued of the last armed azure, and resting the interior hind leg on a rose also gules barbed and seeded proper.
Motto: Security and Service.

The Swords and dragon supporter alludes to the Arms of London. The Rose is a symbol of Lancashire.

Literature : Image from the Archive of the late Arvid Berghman at the Royal Library, Stockholm.