From Heraldry of the World
Your site history : London and North Western Railway
Jump to navigation Jump to search 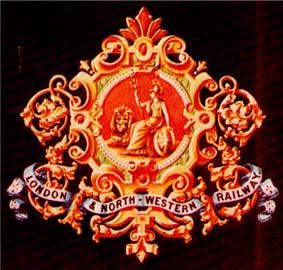 The company was formed in 1846 with the amalgamation of the London & Birmingham, the Grand Junction and the Manchester & Birmingham Railways. All three used the arms of the principal places served - the GJR - Liverpool, Manchester, Chester & Birmingham. The LNWR with some justification regarded itself as the premier railway in Great Britain and adopted Britannia - from the design on the share certificates of the Liverpool & Manchester Railway (the first true passenger railway).