From Heraldry of the World
Your site history : London and South Western Railway
Jump to navigation Jump to search 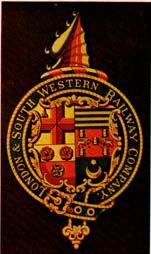 The first device it used bore the shields of those two cities but the final version shows London, Salisbury, Southampton, Winchester and Portsmouth, with the dragon’s wing crest of London. The estoile and crescent of Portsmouth is said to have been a crusade badge of Richard I, who established the naval base there.