From Heraldry of the World
Your site history : Loughborough University
Jump to navigation Jump to search 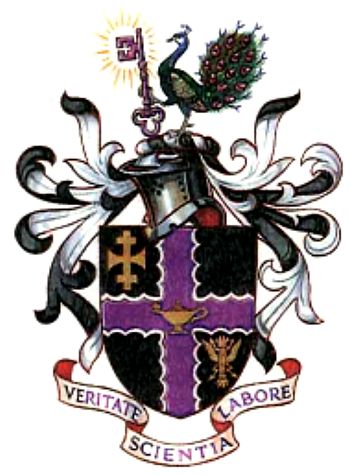 Arms: Sable, on a cross engrailed purpure fimbriated argent between in the first quarter a cross composed of the upper and lower limbs of a cross crosslet and the horizontal limbs of a cross formy, and in the fourth quarter a thunderbolt, an ancient lamp, all Or.
Crest: On a wreath of the colours, A peacock proper supporting with the dexter claw a key purpure, the wards upward and irradiated Or.
Motto: Veritate scientia habere