From Heraldry of the World
Your site history : Lucy Cavendish College (Cambridge University)
Jump to navigation Jump to search 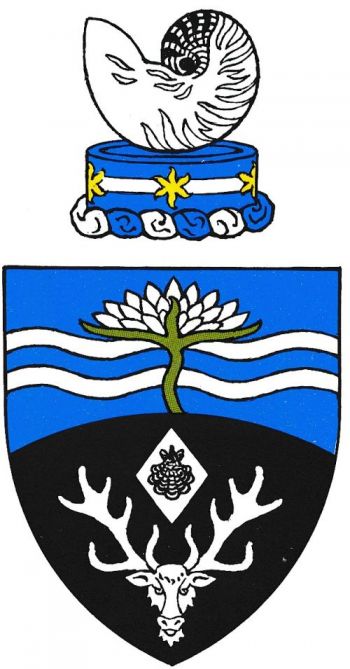 Arms : Per fess enarched azure and sable, in chief two bars wavy argent, over all issuant from the fess line a water lily also argent slipped and leaved vert, and in base a buck's head caboshed, between the attires a lozenge argent charged with an escallop sable.
Crest: On a wreath argent and azure, within a circlet azure charged with a barrulet argent and over all four estoiles or, a nautilus proper.

The arms were officially granted in 1973.

The water lily was chosen as a floral emblem suited to a riverside situation, while the black part of the shield suggests the fenland soil. The buck's head on a black ground is from the arms of the Cavendish family, and the scallop shell is from the heraldry of the Lyttelton family. Lucy Caroline Cavendish (1841- 1925), after whom the college is named, was a daughter of the fourth Lord Lyttelton, and the wife of Lord Frederick Charles Cavendish.

In the crest the estoiles are 'lights' alluding to the name 'Lucy', and the nautilus was suggested by the work in the field of marine biology undertaken by Dr Anna Bidder, first principal of the college.