From Heraldry of the World
Your site history : Luxembourg (city)
Jump to navigation Jump to search 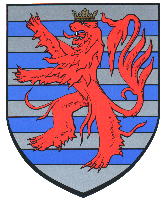 The oldest seal of the city is known from the 15th century and shows a rather typical castle. When in the 15th century the Duchy of Luxembourg became a possession of the Dukes of Burgundy, the seal was replaced. The new seal shows a city gate with in the gate the arms of the Dukes of Burgundy. The counter seal showed a shield with the arms of the oldest Dukes of Luxembourg (see the National Arms for the explanation). Later seals both show the lion and the gate with the Burgundy arms.

The first time the arms were officially mentioned was on November 4, 1697. The arms of the city were entered with that date in the roll of arms of French cities. They are described as identical to the National Arms.

These arms were not changed until 1818. Luxembourg at the time was ruled by the Dutch King (as Grand Duke of Luxembourg) and the arms were registered in The Hague. To distinguish the arms of the city from the national arms the blason was changed from 'barry of silver and blue of 10 pieces', to 'silver with five blue bars'.

The city, however, continued to use the old arms. During most of the 19th and 20th century the city used both arms, but since the middle of the 20th century only the above arms are still used.

In 1948 a proposal was made to change and augment the arms with two savages as supporters, a large mural crown with a mermaid as a crest, two banners behind the shield and the whole placed on a castle. This proposal has not been adopted by the city.