From Heraldry of the World
Your site history : Münchener Kalender
Jump to navigation Jump to search 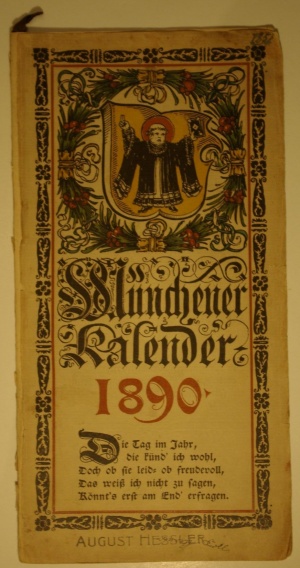 This is a series of large (16x31 cm) paper book calendars printed by G.J. Manz, München, Germany. These calendars were designed by the famous German artist Otto Hupp and were issued by the Zentralverein für Kirchenbau, who decided in 1884 to issue an artcalendar.

The first calendars show, besides the different months and some general information on the year the arms of the zodiac signs, as well as the arms of München on the front page. In 1895 Hupp finally got permission to add in each calendar 12 arms of German States and important noble families. At the end of the calendar genealogical data on the different families were added, written by Gustav A. Seyler and from 1922 onwards by Dr. von Klocke.

An example of the inside:

A special foldable inside was added in 1893 with the arms of the breweries from München:

At the end of each calendar indices appeared with the names of the family arms that were already published. Such indices were also printed separately as advertisment.

The calendars became quite popular and reached sales of 17000 copies in 1895. The calendars were highly advertised and, at the same time, also showed some advertisement on the back for other publications. An example hereof is the advertisement of the Kaffee Hag heraldic albums, also with images of Hupp.

Due to the First World War and the following economic crises in Germany, the volumes dropped to 4000 in 1932, even though the calendars were heavily advertised. In 1933 no calendar appeared. In 1934 Hupp issued one on his own, no longer with the Zentralverein für Kirchenbau. The sales did not go well, but Hupp desperately wanted his 50th edition in 1935, which was eventually issued. A smaller version was finally added in 1936, which was the last one of the series.