From Heraldry of the World
Your site history : Madeira
Jump to navigation Jump to search 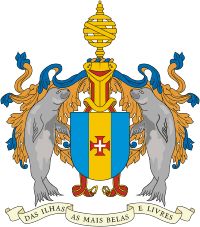 The arms of Madeira show a golden pale in blue for the island in the ocean.
The cross is taken from the arms of the Order of Christ, as two members of the Order discovered the island in 1419. The cross is also used in the 14th and 15th century by the Portuguese sailors and discoverers. The crest shows a globe as a symbol for the discoveries. The supporters are two seals that could be found around the island.

Map of municipalities in Madeira: