From Heraldry of the World
Your site history : Mamer
Jump to navigation Jump to search 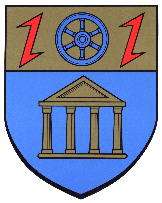 The two hooks are taken from the arms of the Mamer family, a noble family which originated in the village.