Manchester College of Science and Technology

From Heraldry of the World
Your site history : Manchester College of Science and Technology
Jump to navigation Jump to search 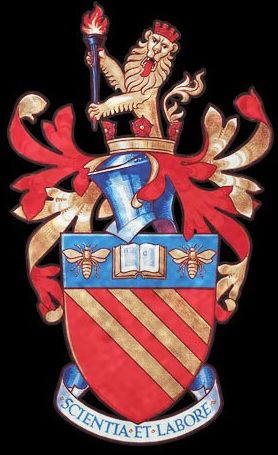 Arms: Gules, three bendlets enhanced Or; on a chief azure an open book proper, edged and bound, between two bees volant gold.
Crest: Out of a coronet composed of four roses gules, barbed and seeded proper, set upon a rim Or, a demi lion guardant gold murally crowned of the first and supporting a torch erect sable fired proper.
Motto: Scientia et labore.

If you have any information on these arms College of Science and Technology mail us !