From Heraldry of the World
Your site history : Manchester Grammar School
Jump to navigation Jump to search 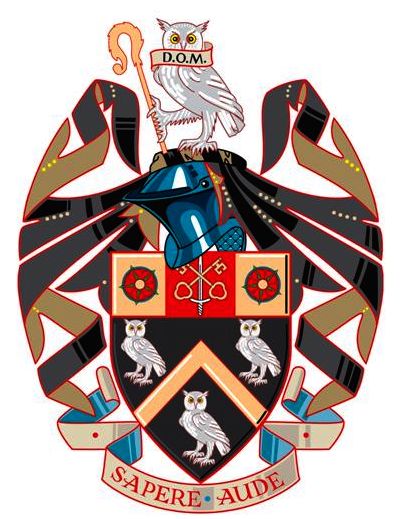 Sable, a chevron or between three owls argent, a chief or, thereon a pale between two roses gules barbed and seeded proper, the pale charged with as many keys in saltire wards upward and outward or, in front of a sword erect proper hilt and pommel or. For the Crest on a wreath or and sable an owl holding in its beak and scroll argent inscribed D.O.M. in letters sable and supporting in its dexter claw a pastoral staff or.

Hugh Oldham, a local boy who went on to become Bishop of Exeter, founded The Manchester Grammar School in 1515.

The school historically used the arms Hugh Oldham bore as Bishop of Exeter. It consists of the arms of the Bishopric of Exeter and Oldham's personal coat side by side, see the image below showing the arms on his tomb. 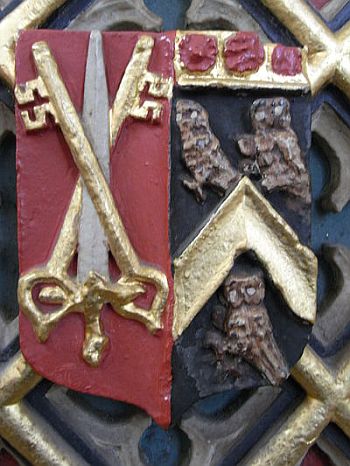 As these were not official, the above arms were granted.

The arms show the Oldham family arms with in chief the arms of the Diocese of Exeter replacing the middle rose.

A problem arose with creating the crest to replace the mitre. The College of Arms suggested as crest an owl with a scroll across its breast on which the inscription D.O.M. The original early royal charter, signed by Henry VIII and dated 21 February 1509 depicting Hugh Oldham's Arms depicts dom, not D.O.M.

To-date no-one has been able to explain why this was translated to D.O.M. on the new crest, but evidence clearly shows that the D.O.M. used by the College in the new Grant of Arms is not the dom as used by Hugh Oldham, his scribes and illuminators, and his stonemason.

The motto Sapere Aude translates as 'Dare to be Wise'.