From Heraldry of the World
Your site history : Manchester Ship Canal Company
Jump to navigation Jump to search 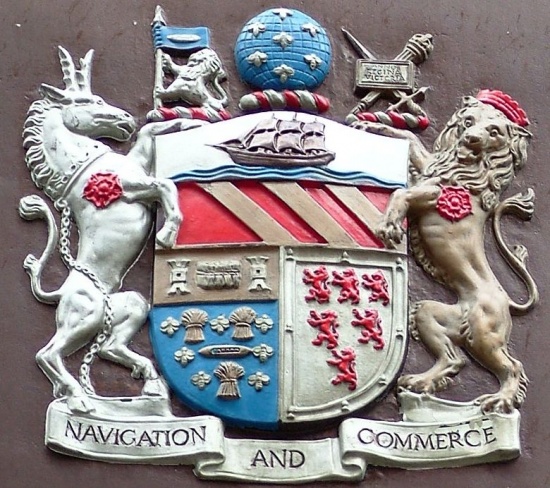 Above the shield is Manchester's crest of a terrestrial glove semé of bees volant, placed between two other crests on torses resting on the top of the shield. That on the dexter is a demi-lion supporting a staff and therefrom flying to the dexter a flag — presumably based on the crest of Salford but omitting the shuttle with which the flag is charged. The crest to the sinister is described as a sword and mace in saltire, the sword enfiled with a wreath of laurel, both surmounted by a scroll bearing the inscription ' Anno Victoriae Reginae."

The shield is supported by an antelope, collared and chained, and a lion guardant murally crowned, each charged on the shoulder with a rose. These are precisely the supporters of the City of Manchester.

The motto is 'Navigation and Commerce'

Literature : image and information from https://www.theheraldrysociety.com/ and the Heraldry Gazette, 1958, nr 8, p4.