From Heraldry of the World
Your site history : Marine and General Mutual Life Assurance Society
Jump to navigation Jump to search 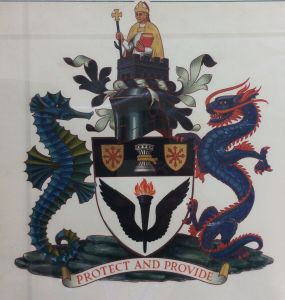 Arms: Argent, a torch winged sable, enflamed proper; on a chief of the second a capstan also proper cabled Or between two escutcheons gold each charged with an escarbuncle Gules.
Crest: On a wreath of the colours, Issuant from the battlements of a square tower sable, a demi figure representing St. Swithin, habited and mitred, proper supporting in the dexter hand a walking staff also sable ensigned with a cross paty convexed Or and holding with the sinister hand a book gules edged gold.
Supporters: On the dexter side a sea horse (Hippocampus) azure and on the sinister side a Chinese Dragon azure tufted gules.
Motto: Protect and provide.

The arms were officially granted on February 23, 1955.

If you have any information on these arms and General Mutual Life Assurance Society mail us !