From Heraldry of the World
Your site history : Marks and Spencer
Jump to navigation Jump to search 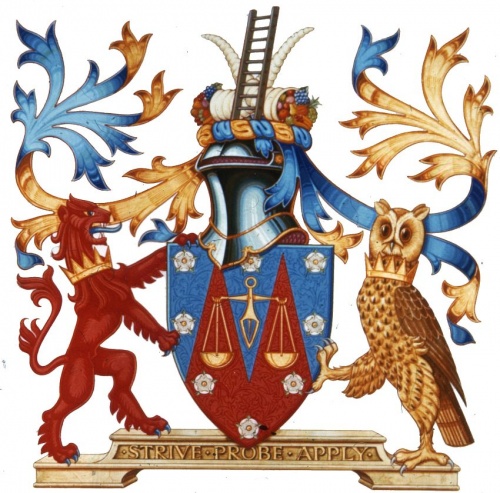 Arms: Pily azure and gules, a pair of scales Or in an orle of roses argent barbed and seeded Or.
Crest: On a wreath of the colours, In front of two cornucopiae in saltire a ladder erect proper.
Supporters: On the dexter side a lion gules and on the sinister side an owl proper, each gorged with an Eastern crown Or.
Motto: Strive, probe, apply.

The arms were officially granted on October 1, 1968.

A lion, representing England, and an owl, representing wisdom, support a symbol of the Archangel Michael. A pair of golden scales portrays justice (and fair trading), white roses represent Yorkshire, where Michael Marks had his first stall, a ladder (from Jacob`s dream) is a sign of the aspiration and will to improve, and a horn of plenty stands for the plentitude of goods sold by the company.

Beneath the shield is the company`s motto `Strive, Probe, Apply'.