From Heraldry of the World
Your site history : Markus Peter Christian Kalter
Jump to navigation Jump to search 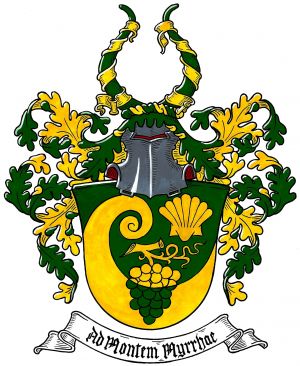 Arms: Per fess voluted Vert and Or, in sinister chief an Escallop inverted Or and at nombril point a bunch of Grapes tendriled, all counterchanged.

Crest: Issuant from a Helm wreathed and mantled Vert doubled Or, a pair of pointed Bulls´ Horns Vert, each circled by a ribbon serpentined Or.

The name „Kalter“ derives from the German word „keltern“, which means making wine, or, more correctly, harvesting and, especially, pressing and storing wine. The family, at least as the references have it so far dating back to the 18th century, originates from the small settlement of Arzheim near Coblenz, Germany, which has since become part of that city. A fair number of ancestors have worked in the winemaking industry up to the middle of the 19th century. Coblenz is situated at the confluence of the rivers Rhine and Mosel. These two rivers are denoted by the interlocking golden and green spirals on the shield, which symbolise not only watery movements but also the growth of grapevine. The bunch of grapes in the foreground at the shield´s base forms the symbolical bedrock of the coat of arms and, cantingly, alludes to the family´s name. Also, with the grapes being counterchanged Or-Vert, they symbolically merge with the two rivers and echo the two colours of white wine and its foliage, which this region is particularly known for, during the year´s seasons. The Catholic Creed has played a very important role during the majority of the family´s existence. The Pilgrim´s Shell or Scallop is not only a symbol strongly employed in heraldry, but also signifies striving for an ideal through daily small paces. This seems to resonate quite well with the family`s beliefs, especially with the values of modesty and industry. The pointed bull´s horns take up the motif of the two rivers (and grapevine growth), strengthened by having them circled with golden bands echoing the rivers´ movements through the landscape. The motto is a short sequence taken from the Song of Solomon. As such, „Ad Montem Myrrhae“ aspires to higher ideals, but at the same time refers to love, which should be at the centre of every family. Heraldic artist: Ralf Burkert from Munich, Germany

Flandrensian Roll of Arms (a micronation founded in Belgium)