From Heraldry of the World
Your site history : Maryvale Institute
Jump to navigation Jump to search 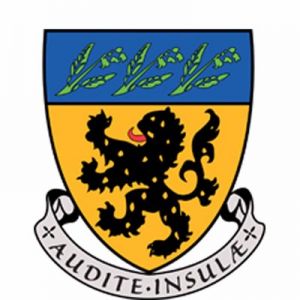 Arms: Or a Lion rampant Sable gutty Or and on a chief Azure three sprigs of Lily-of-the-valley (Convallaria Majalis) each with two leaves and three flowers in bend sinister proper.
Motto: 'Audite Insulae'.

The blue chief represents the cloak of the Blessed Virgin Mary to whom, on the 1st. May (May-Day) the Pagan feast of Spring, children give lilies-of-the-valley to their mothers to reassure them (in the Christian version) that they are 'keeping the faith'. At the same time they are a canting element. The direction of which the three sprigs spring, like the three lily bells, indicative of Trinitarian Faith, is in the stance of offering, being held out in the hand to Mary.

The motto, taken from the 49th chapter of Isaiah, is for the readings of the birthday of St. John Baptist, "Harken you islands" or in the modern translation "Listen to me, o wastelands... and harken you peoples from afar".