From Heraldry of the World
Your site history : Matthew Levi Steven Schmuel Lipkin Hart
Jump to navigation Jump to search 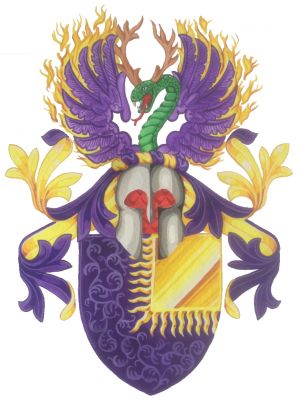 Purpure a quarter sinister rayonny or. Mantled the first doubled the second. For a crest, issuant from a torse, a demi-serpent erect displayed attired proper and winged flammant of the field.

Purple and gold are the classical colours of both political office and justice. As the armiger has worked for decades to obtain a juris doctor, and has cultivated a career in government, these are thus their chosen tinctures. The sinister quarter represents their Jewish heritage, as Judaic tradition is passed down maternally. Rayonny represents the armiger's drive to succeed. The serpent is a symbol of wisdom, power and longevity. Its wings are meant to be reminiscent of a phoenix, as the armiger recovered from destitution. The antlers are a canting, as a buck of five or more years is a hart.