From Heraldry of the World
Your site history : Maybole
Jump to navigation Jump to search 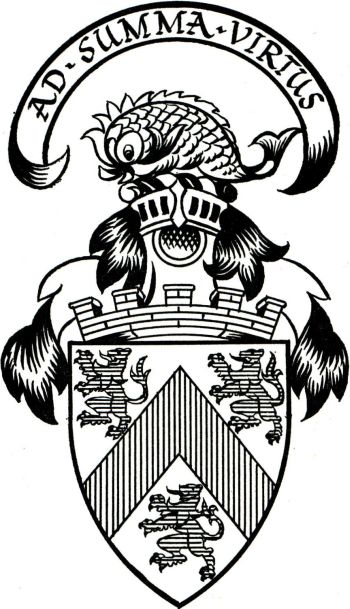 Argent, a chevron Gules between three lions rampant Azure, armed and langued of the Second.

Above the Shield is placed a Burghal coronet and a Helmet befitting their degree, with a Mantling Gules doubled Argent, and on a Wreath of their Liveries is set for Crest a dolphin naiant Proper, and in an Escrol over the Shield this Motto "Ad Summa Virtus".

Maybole was created a Burgh of Barony in 15I6 in favour of Gilbert Kennedy, 2nd Earl of Cassilis.

The arms follow pretty closely the device on the seal adopted by the Burgh in 1892. The silver field and red chevron of the old Earldom of Carrick denote that Maybole is the capital of that district of Ayrshire.

The three blue lions are for King Robert I who was Earl of Carrick before he became King; the original arms of the Bruce family before they assumed the arms of the Lords of Annandale showed a blue lion rampant on a silver field.

The dolphin crest is that of Kennedy, Marquis of Ailsa, the leading proprietor in the district, while the Latin motto-"Courage to the End"­ is one of those used by the Bruce family.

Argent, a chevron Gules between three lions rampant Azure, armed and langued of the Second.

Above the Shield is placed a Coronet appropriate to a statutory Community Council, videlicet:- a circlet richly chased from which are issuant four thistle leaves (one and two halves visible) and four pine cones (two visible) Or, and in an Escrol below the Shield this Motto "Ad Summa Virtus". 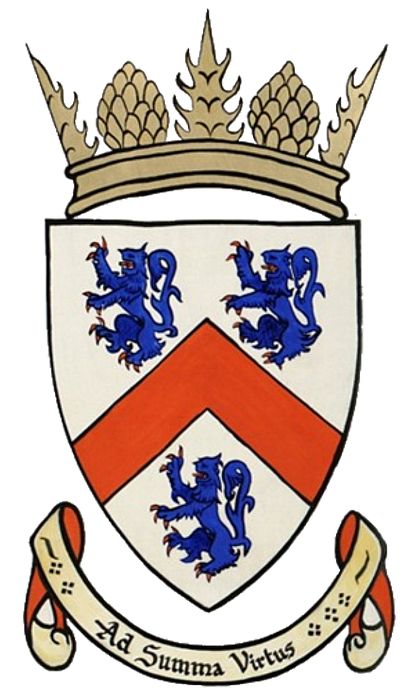 The arms are based on the old burgh arms, but with the crown of a community council instead of the crest.