From Heraldry of the World
Your site history : Medical Society of London
Jump to navigation Jump to search 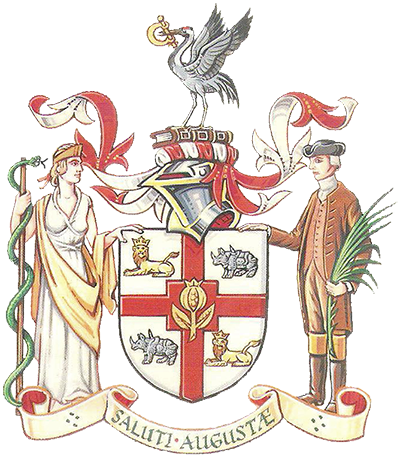 Arms : quarters a lion couchant guardant proper crowned or and in the second and third quarters a rhinoceros statant proper a cross quadrate gules thereon a pomegranate slipped and leaved gold.
Crest: upon a helm with a wreath argent and gules statant upon a closed book a crane wings elevated proper holding in its beak a shacklebolt gold. Mantled gules doubled argent.
Supporters: dexter a female figure in Roman dress looking to the sinister holding in her exterior hand a staff proper entwined by a serpent vert and sinister a male figure representing Dr. John Coakley Lettsom holding in his exterior hand a palm branch all proper.
Motto: Saluti Augustae

The arms were officially granted in May 1993.

The cross on the shield combines reference to the Society's origin in the City of London and its present site near Cavendish Square. The three branches of the medical profession in the late 18th century were apothecaries, represented by Dürer's representation of a rhinoceros in the crest of the Worshipful Society of Apothecaries; physicians, represented by the pomegranate that appears in the arms of the Royal College of Physicians of London, and surgeons, represented by the lions as they appear in the shield of the Royal College of Surgeons of England.
The lions' crowns are of the type used in the London hallmark for silver when the Society was founded in 1773.

Of the supporters, Dr. Lettsom founded the Society and his birth in Tortola is indicated by the palm branch. The female figure represents Isis of Sais and is taken from the Society's original emblem but apart from the medical symbolism in the badge, her connection with the Society is not known. The motto can be flippantly translated as Astonishing good health but 'To health as consecrated' might be more appropriate.