From Heraldry of the World
Your site history : Melbourne Girls Grammar School
Jump to navigation Jump to search 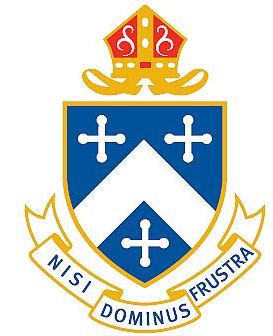 Arms : Azure, a Chevron between three Crosses pomelly Argent.
Crest : A Mitre (not granted in Letters Patent, but approved by Garter as permissible to mark an Anglican School).
Motto: 'Nisi Dominus Frustra'.

Designed by Dr Alexander Leeper, first Warden of Trinity College, Melbourne, and a member of the School Council, in 1904, when the School had officially become a Church school, the Arms used previously having been those of the Morris family. Dr Leeper chose the three crosses as a specifically Christian design.