From Heraldry of the World
Your site history : Melbourne Stock Exchange
Jump to navigation Jump to search 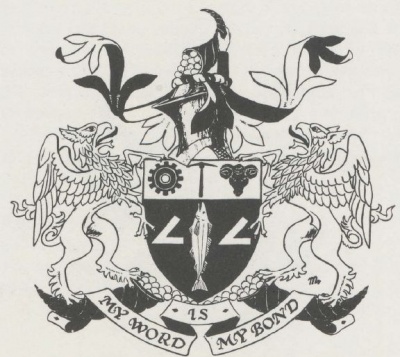 Arms : Azure, a Stockfish haurient Or between two Plough Shares Argent, on a Chief Or a Pickaxe haft downwards between a Cog-wheel and a Ram's head caboshed Gules.
Crest : On a Wreath of the Colours, supporting a Cornucopia Gules, issuing therefrom Bezants and Plates, a dexter Cubit Arm proper, vested Sable.
Supporters : On either side a Griffin Or standing on a Cornucopia as in the Crest.
Motto: 'My Word Is My Bond'.

The arms were officially granted on January 1, 1965.

The cornucopia is a symbol of wealth; bezants (gold pieces) and plates (silver pieces) are tra­ditional for bankers and financiers. The stock fish and the plough shares are canting for the wealth of land and sea. The ram's head speaks of wealth and reminds of Lamb (the family name of Lord Melbourne). The cog-wheel and pickaxe recall industry and mining, and the griffins are traditional guardians of wealth.

The Motto is a reminder of that of the Stock Exchange, London, 'Dictum Meum Pactum', and was adopted with their kind permission.